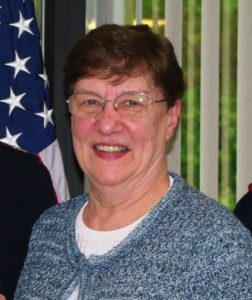 Sister Audrey Quinn, joined the Benedictine Sisters of Pittsburgh in 1959 and taught for 25 years in Catholic schools in the Dioceses of Pittsburgh and Greensburg. In 1989, Sister Quinn came to Greene County to live and minister. From humble beginnings in a sparsely furnished old farmhouse, she began addressing unmet needs of those around her.
In 1990 she came across a poster seeking foster parents. Shortly after she became a “Foster Mom” through Greene County Children &amp; Youth services nurturing over 160 foster children, ages 3 days through 16 years. So vested in the mission, she served as President of Greene County’s CYS Foster Parent Association. Raising the children also inspired her to do more for the wider community.
A regular volunteer with Greene County Habitat for Humanity; Meals on Wheels; St. Ann Soup Kitchen; United Way Appeals and Greene County Mothers Against Drunk Driving, she has also held board positions with Catholic Charities; Corner Cupboard Food Bank; Greene County Children &amp; Youth; Greene County Human Services; Greene County CASSP and the Benedictine Sisters of Pittsburgh. She coordinates the Produce to People
program and handles the recruiting of volunteers for the Greater Pittsburgh Community Food Bank’s monthly program to distribute free food to more than 500 needy families in Greene County.
On her 10 th anniversary of arriving in Greene County, along with fellow Benedictine Sister Sue Fazzini, the pair founded “Heart ‘n Sole”, a program to make sure every child in Greene County has a good pair of shoes to start the school year. The program has provided thousands of new school shoes. The sisters handle the solicitation, donation collections and distribution of shoes each year.
Presently, as the Director of The Salvation Army Greene County Service Center, she continues to serve by maintaining a free clothing/household good warehouse and coordinates with Emergency Disaster Services for those in dire need of immediate assistance. She assists clients with basic needs such as food, clothing, utility and rent assistance. Under her direction the Service Center provides a free summer camp and facilitates programs with other social service agencies throughout the County by coordinating fund-raising efforts, public relations and volunteer recruitment.
Her work has not gone unnoticed. In 2008 she was chosen from 3,000 nominees from across the country as one of the “100 Extraordinary Women” sponsored by Kraft Foods. In 2009 she was selected as a top ten finalist from among 3,500 nominees in the CVS Pharmacy “For All The Ways You Care” program and earned an appearance on Good Morning America. 2010 brought the “John McGrady Award” and 2016 the Jack McCracken
Award, both for Outstanding Service to Community

Glenn William Gensler, “Bill”, was a life-long resident of Greene County. Bill began his service to others at an early age: shoveling snow in the winter, mowing lawns in the summer, delivering daily newspapers and assisting his mother in the care of his grandparents.
Bill was a Waynesburg Central High School graduate. Following high school, Bill earned an Accounting degree from Robert Morris University, and subsequently an Elementary Education degree from Waynesburg College,
Bill student taught at Amity School where he met his wife of 45 years, Joy. Bill then began his teaching career at Whiteley School in Greene County. He then transitioned to East Ward Elementary School in Waynesburg Borough. In Bill’s twenty-five years of teaching in the Central Greene School District, he had a positive impact on the lives of many children. During his career, he bestowed his generosity to many children and their families that were in need.
Bill was a faithful and humble servant of God. He was a life-long member of the First United Methodist Church of Waynesburg, where he served on the Board of Trustees and as the Sunday School Treasurer for nearly thirty years.
Bill was also a dedicated member of the Waynesburg Lions Club, where he actively participated within the community. He enjoyed events such as the annual Halloween Parade, 4 the of July celebration and driving a local queen or honoree in his antique Nash in the Christmas Parade.
Most importantly, Bill adored and was devoted to his family. Bill has a strong bond with his mother, and cared for her through her years. He was a loving husband, father and grandfather. If you had the privilege of running into Bill out and about, you would hear how proud he was of his daughter Ann and his granddaughters Madeline and Emily. He never met at stranger, and enjoyed telling stories. 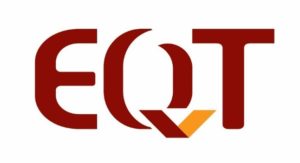 For EQT Corporation, the nation’s top producer of natural gas, Greene County is one of its most prolific and successful operational areas. EQT plays a key role in developing the region’s abundant source of natural gas to meet the country’s demand for clean-burning energy, and Greene County is an essential part of that. But it’s not just about ‘doing business.’ Many of
EQT’s employees live here or grew up here, and have profound respect for our Greene County neighbors.
With more than 130 years of experience and a long-standing history of good corporate citizenship in southwestern Pennsylvania, EQT strives to provide a rewarding workplace and enrich the communities where they work. Economically and philanthropically, EQT has made exciting and substantial investments in the wellbeing of Greene County residents and is proud to
be a part of this community.
In addition to generating millions of dollars in state and local tax revenues, and supporting tens of thousands of jobs, EQT has donated millions to groups and programs focused on arts and culture, community and economic development, education, diversity, and the environment through corporate giving and its charitable arm, the EQT Foundation.
EQT proudly sponsors the Washington and Greene Counties Covered Bridge Festival, Greene County Envirothon, Rices Landing Riverfest, and Waynesburg’s annual Rain Day and Holiday Open House. They also provide Operation Warm coats for Greene County children; consistently contribute to civic projects and first responders; employees regularly help with Produce to People; and in 2017 the EQT REC Center opened to Greene County residents who didn’t have anything like it before in the area. The EQT REC Center will serve Greene County families for decades into the future, reminding all of us that great things can be accomplished when a community comes together. 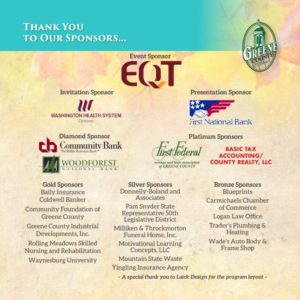 It would be difficult to find someone in Greene County who would have an unfavorable opinion of Gene Rush and his wife, Judy.  In an often thankless and always bittersweet profession, Gene Rush has established himself as a man of character, service and compassion.   His success is due to the trust placed with him and his family because of the consistent and unwavering service they have made a pillar of their lives. 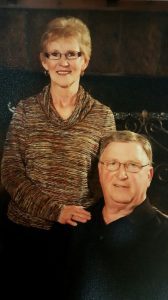 The Rushes have built successful businesses in the last 30 years.  As remarkable and impressive as that is, it remains the least remarkable part of their legacy.

Moving to Rogersville in 1985, Gene purchased the funeral home of the late Robert Lantz.  An Air Force veteran and a funeral director since 1972, Gene brought dignity and impeccable care to all that he did and built a reputation of professionalism and generosity.  Having sincere compassion and dedication to his role in the lives of grieving families, people feel like they matter to Gene because to him, they do.  Every aspect of a person’s time with Gene must and will be perfect as he expects the absolute best for every family.

Gene and Judy opened Rush Grocery in 1993 and became a vital part of the West Greene landscape and welcomed the sense of community that followed and still exists today.  With all their “spare time,” Gene could serve as Secretary of the West Greene Lions Club, a member of the American Legion, Waynesburg VFW, Board of Trustees at Rogersville Methodist Church, Board of Directors of the former Greene County Memorial Hospital, Board of Directors for Community Foundation of Greene County and other civic groups.

Gene and Judy have given a lifetime of service to others in both commitment and deed – offering help to strangers, neighbors, and friends, anonymously, without being asked, without thinking twice.  These are two individuals who, despite their business responsibilities, will reschedule their day to give rides to the doctor, pick up and deliver mail, serve dinners at firehalls and make every person they speak to feel like they are truly valued.

What makes this couple impressive is not simply the financial support or donations; it’s the idea that a person serves simply because they have the ability – a person should give just because they have the means.  It is this reputation that precedes Gene and Judy, and it is that legacy they leave for their children, grandchildren and the people they have served. 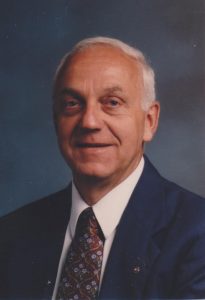 Born one of five children in the family home in 1942 in Waynesburg in the area commonly known as “Dotysburg,” Dave began his service to others  in life by pushing a lawn mower across town to mow grass.  When he was in high school, he worked to help support his family at “Spragg Wool.”  After graduation, he attended Waynesburg College and worked at Waynesburg Milling. He met his wife, Mary Ann Crouse, at Waynesburg College.  Dave graduated with a bachelor’s degree in History with the intention of becoming a teacher; however, life got in the way.

He began working to support his wife and two young sons, Bryan and Brad, at the Goodwin Agency, selling life insurance. It was here that his charisma, charm and natural expertise in business gave him the opportunity to turn himself into the businessman, community supporter and volunteer that many of us remember and respected.  He went on to become a part owner in the Goodwin Agency and bought the house off High Street he had grown up in.

Dave was a quiet leader.  He led by example – doing and showing – and found ways to encourage others to willingly serve alongside him.  He never seemed to be interested in the power or glory roles; he was always right there to support, cheer, encourage and help where ever possible. 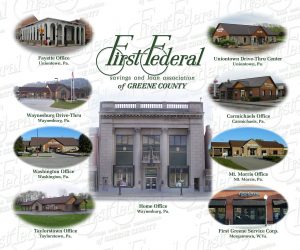 First Federal Savings and Loan Association is honored to receive the inaugural McCracken Legacy Award. From its humble beginnings in Carmichaels in 1924 to its move to Waynesburg Borough in the 1940’s, First Federal has been rooted in the community for nearly 100 years.

With assets today of approximately $900 million, First Federal has remained committed to supporting various local events, charities and organizations, particularly those benefiting children, committing both time and resources. Annually, tens of thousands of dollars are donated to worthy causes. Being a good neighbor and a good steward of its blessings is paramount to the Association’s identity and role in the community.

As part of being a good neighbor, First Federal is also giving back to its home community in the form of new construction. As First Federal changes, the Association is expanding its physical footprint at the site of the main office in Downtown Waynesburg with the addition of a two-story brick building that will primarily be the location of the mortgage department.

The new construction – the first in Waynesburg’s Business District in decades – began in April 2016 and is expected to be completed in spring 2017. The façade of the addition will pay tribute to the spot’s original occupant, the Allison Building, also known as the birthplace of the Rain Day tradition in Waynesburg.

As a family-oriented business, First Federal cares deeply about its customers, employees and communities. The Association is proud to set the standard for future McCracken Legacy Award winners. 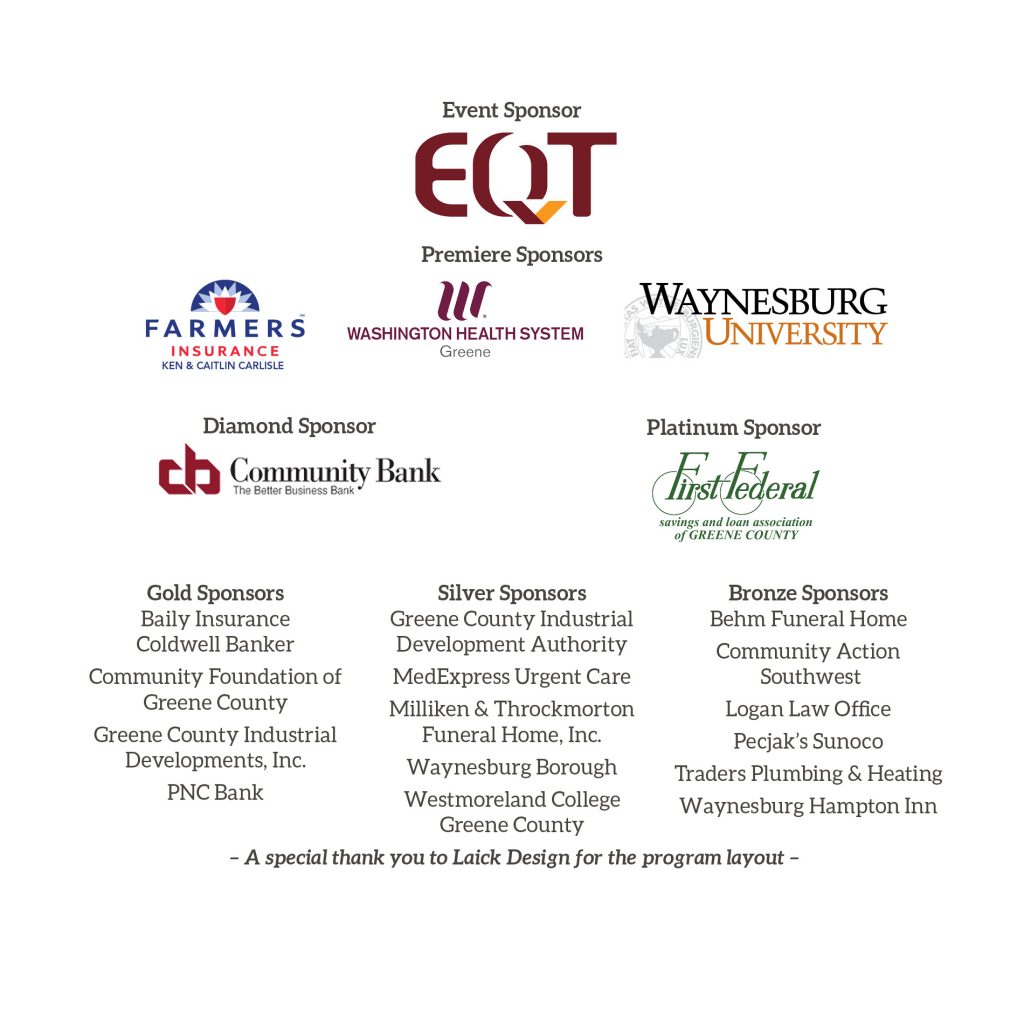